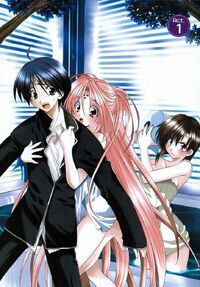 The first chapter to the Girls Bravo Manga Series.

Yukinari Sasaki, a young man with an allergy to females, teleports to Seiren, a planet with a mostly female population, and meets a girl named Miharu. Miharu does not set off Yukinari's reaction, and as a result, the two become very close. They manage to avoid a mob of Seiren females attracted to Yukinari, including Miharu's voluptuous older sister Maharu. After returning to Earth, Yukinari once again gets beaten by Kirie for seeing her naked and Miharu starts to think about her new life on Earth.

This story was adapted into an episode of the Girls Bravo Anime Series under the title Bravo From the Bathroom!.

Retrieved from "https://girlsbravo.fandom.com/wiki/Act._1?oldid=4125"
Community content is available under CC-BY-SA unless otherwise noted.