Kosame (小雨) is one of Lisa Fukuyama's bodyguards who works alongside Hayate. She has a supporting role in the series, commonly assisting the young Lisa in several of her plots, though more often in assisting in her brother's plots. Kosame is a professional hitwoman who is trained in several forms of martial arts as well as in marksmanship. 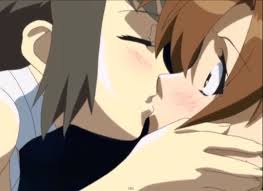 Kosame is a strict and professional woman who (aside from very few occasions) always wears her uniform and is always stoic and alert. After fighting Kirie Kojima, Kosame formed an attraction to her and eventually fell in love with her.

Kosame’s most notorious plot point is her love for Kirie Kojima. After engaging in combat with Kirie, she grew attracted to her and eventually fell in love with her. Whenever Kosame sees Kirie, she blushes and immediately attempts to woo her or incite her into having sex with her. Kosame is repeatedly frustrated because of her failed attempts to seduce Kirie, so she makes it her purpose in life to sleep with her.

Kosame touches Kirie's face
Add a photo to this gallery
Retrieved from "https://girlsbravo.fandom.com/wiki/Kosame?oldid=5023"
Community content is available under CC-BY-SA unless otherwise noted.