Yukinari Sasaki (佐々木 雪成 Sasaki Yukinari), nicknamed Puninari by Kazuharu Fukuyama, is a character in the manga and anime series Girls Bravo. He is one of the major characters in the series as well as the main protagonist. He is also the only recurring male character apart from Kazuharu Fukuyama.

Yukinari has blue hair which is always seen in his distinctive hairstyle and blue eyes. In his most of his common appearance, he wears his school uniform which consists simply of navy-blue trousers and a navy-blue jacket, which has light blue highlights to it. He wears this outfit most of the time, even when he's away from school, usually because his friends rarely give him the opportunity to change. Despite this, he shows no discomfort in wearing it and he never wears this outfit on weekends or when going on trips away from home, but the outfits he wears during these times are never fixed.

Yukinari is well known in the series for his gynophobia, a fear of women. He has been teased and maltreated by girls, including Kirie Kojima (Yukinari's best friend) during his childhood. As a result, he has developed an allergic reaction to them as he breaks out in hives whenever he comes in contact with one, but the only girl who does not cause him to do this is Miharu Sena Kanaka. Because of this, Yukinari eventually develops a crush on her which grows as the series progresses. Exactly how their relationship resolves is different in the anime and the manga. In the anime, it is unclear how their relationship went on. In the manga, it is implied that Yukinari and Miharu eventually got married (which now makes her Miharu Sena Sasaki). 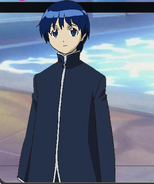 Add a photo to this gallery
Retrieved from "https://girlsbravo.fandom.com/wiki/Yukinari_Sasaki?oldid=4977"
Community content is available under CC-BY-SA unless otherwise noted.